Professor Frede Blaabjerg wins the EAWE Scientific Award, which is awarded by the European Academy of Wind Energy. He receives the internationally recognized award for his pioneering research in power electronics for wind energy.

The prize is awarded each year by the European Academy of Wind Energy, an association of the leading European research institutions and universities in the field of wind energy.

Frede Blaabjerg, who is a professor at the Department of Energy Technology, is pleased with the recognition. He also sees it as a pat on the back to his partners and Aalborg University.

- It is a great recognition of me, my work and the people I work with. It is also a recognition of Aalborg University and Danish engineering research. I hope that it will make us even more visible internationally in both the wind power industry and other scientific environments, says Frede Blaabjerg, who received the award yesterday at a virtual conference. 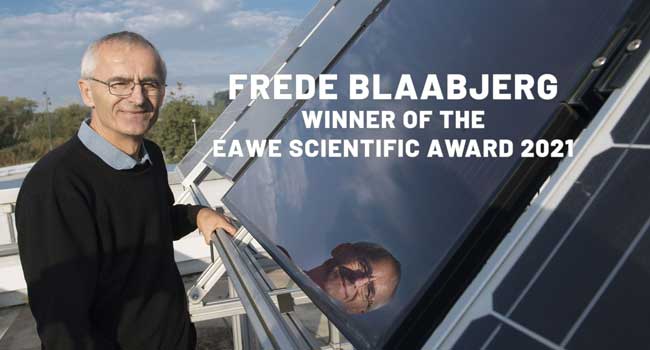 Solar and Wind Energy a realistic alternative to fossil fuels

Frede Blaabjerg gets the award for his more than 30-year work as a pioneering researcher in power electronics. These are systems and components that can handle high voltages, large effects and varying frequencies. It is a crucial field of research in the field of renewable energy.

With his research, Frede Blaabjerg has, among other things, created a foundation for solar and wind energy today being a realistic alternative to coal and oil.

The management of Aalborg University is also excited about the award.

- This is another well-deserved recognition of Frede Blaabjerg, who has long been in the absolute world elite in his field. It is difficult to exaggerate the importance of his energy research, which has and will leave significant traces in the green transition of the world community, says Rector of Aalborg University, Per Michael Johansen.

- Awarded every year since 2007 to researchers of great importance to the wind energy sector.

- The winner is nominated by the European Academy of Wind Energy, an association of universities and research institutions.

- Presented during a science conference, WESC, which this year is digital (link to WESC 2021 conference)

- Previous winners include researchers from the USA, Germany, England, the Netherlands, Greece and Denmark. See the full list of previous recipients

- Professor of Power Electronics at the Department of Energy Technology at Aalborg University.

- Has previously received several international awards such as the IEEE Edison Medal and the Global Energy Prize.

- Chairman of the Danish Research and Innovation Policy Council (DFiR).