Josep M. Guerrero, Professor at the Department of Energy Technology, has just received notice that he will receive the honorary title of Fellow from the IEEE “for his contributions to distributed power systems and Microgrids.”

Each year, following a rigorous evaluation procedure, the IEEE Fellow Committee recommends a selected group of recipients for one of the IEEE’s most prestigious honors, grade elevation to IEEE Fellow. 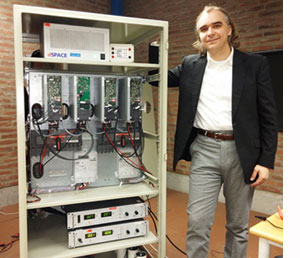 According to the IEEE, “The grade of Fellow recognizes unusual distinction in the profession and shall be conferred by the Board of Directors upon a person with an extraordinary record of accomplishments in any of the IEEE fields of interest. The accomplishments that are being honored shall have contributed importantly to the advancement or application of engineering, science, and technology, bringing the realization of significant value to society.”

One example of his earlier research is the application of large scale electrical control concepts to small distributed systems. He developed proof-of-concept tools such as the “virtual impedance” concept to parallel an unlimited number of power electronics converters without relying on communication systems; this fact may be seen as a paradox regarding his background on telecommunication engineering. Nevertheless, in the top of that he already developed distributed control systems that make use of noncritical communications in order to avoid centralized control units.

Professor Josep M. Guerrero is the co-leader of the Microgrid Research Programme at the Department of Energy Technology at Aalborg University.