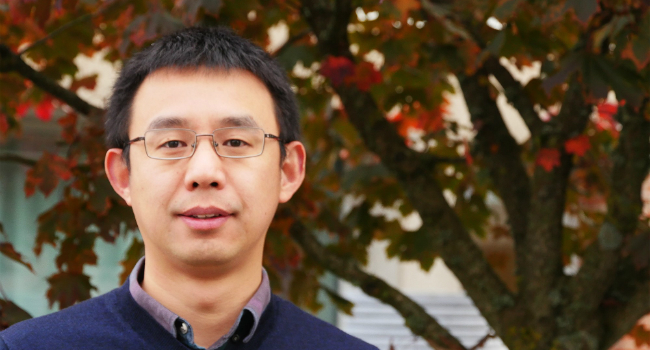 Xiongfei Wang is one of Aalborg University’s prominent young scientists. The Chinese born researcher, who has just been appointed professor in power electronic systems, has recently gained international acclaim for his work on adjusting energy infra structure to suit alternative sources of energy.

Xiongfei Wang is one the world’s most promising young energy scientists. He does research on how sustainable energy can be harnessed and distributed in a stabile energy distribution system.

The sun only shines during the daytime and the wind varies all the time. This means that there will be a lot of fluctuations in the energy that enters the system. The infrastructure needs to be ready to cope with this – if not, we risk losing energy as well as falling short when we need a lot of it.

One of the main differences in the future electric grid infra structure according to Xiongfei Wang is that we are going to use power electronics converters in many more places to be able to control the electricity more efficiently.

Most of us are familiar with converters as a small box at the end of the cord that enables us to charge our cell phones by plugging them into the wall outlet, or to run other types of electronic gear. But the technology can be used in many other places than at the mouth of an electric socket.

We are spending a lot of time looking at how we can apply converters to secure a stable electricity supply throughout the electric power system, he explains. Instead of using generators to produce electricity like we have done for more than a hundred years, we can use converters to make usable electricity from the alternative energy that comes in instead.

34-year old Xiongfei Wang came to Aalborg University in 2009 from Harbin Institute of Technology, China, to do his Ph.D. Originally he was drawn by Denmark’s and Aalborg University’s international reputation on wind turbine technology, but he quickly became aware that more challenges are faced by the integration of large-scale wind power generations.

Image text: Xiongfei Wang from the Department of Energy Technology at Aalborg University is among the world’s most promising researchers in integrating alternative energy sources into the power system. Photo by Jakob Brodersen.