Professor Claus Leth Bak from the Department of Energy Technology at Aalborg University has been elected chairman of CIGRE’s Danish National Committee from September 1st, 2018.

Claus replaces Jørgen S. Christensen, Dansk Energi, who has been the chairman for 13 years and has done a tremendous effort in securing acknowledge in the CIGRE circles. Jørgen has contributed to the expansion of CIGRE to include all areas of the electrical system from production to transmission, distribution and end user. Read more here (in Danish).

Claus has entered the CIGRE Administrative Council that functions as CIGRE’s representative in connection with the 2018 CIGRE Paris session which is the world’s leading conference for specialists within the field of power supply.

CIGRE (International Council on Large Electric Systems) is a non-profit international association from France. CIGRE has both individual and collective members – around 9.100 members from 90 different countries around the world. CIGRE consists of industry, users (electric companies and TSOs) and universities. It is the only global organization that works with energy and electricity supply.

The Department of Energy Technology, Claus Leth Bak and CIGRE’s Danish National Committee arrange the CIGRE international symposium in Aalborg in June 2019 – the first CIGRE symposium ever held in Denmark.

The title of the symposium is ”GOING OFFSHORE - Challenges of the future power grid” and will include study committee meetings, working group meetings, tutorials, a trip to Anholt Offshore Windmill Park and two full days of conference with 32 sessions. 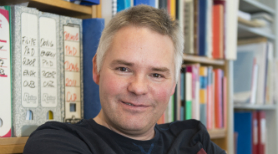