Microgrids (MGs) offer several advantages over conventional electrical power networks. Among them DC MGs have attracted significant research attention, which is typically organized by a hierarchical structure, where a support of a communication system is required. Due to the increased opening of networks, DC MGs have significant potential security threats and are more vulnerable to various cyber attacks. The secure control of the coupling between a vulnerable cyberspace and a complex physical system (CPS) imposes fundamentally new challenges for distributed control systems (DCSs). 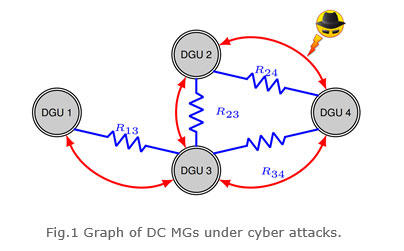 Local units need to communicate with each other in the secondary control of MGs. This, however, could make DC MG systems vulnerable to the presence of cyber attacks. Most of the works about security of control systems consider centralized architectures. So, a completely set of different scenarios should be considered in the communication network for the distributed controlled DC MGs. The impact of different attacks will be investigated.

An attack detection architecture will be designed to detect potential cyber attacks. State estimation method will also be used to evaluate the state of its neighbours. A threshold based local detection scheme will be developed and detectability of cyber attacks will be analysed when DC MGs is affected by different attacks. The proposed methods should be able to identify, with limited information of the overall DC MGs’ model, attacks present in the communication network supporting a consensus based secondary control.

The overall objective is to design a novel control scheme for DC microgrids. Time varying MG behaviors and nonlinearities will be studied. Impact of different types of attack on DC MGs will be discussed to show potential weakness of distributed MG control. Also, attack detection and state estimation method will be proposed to detect the presence of malicious attacks aimed at compromising the stability of distributed controlled DC MG systems.

Publications in journals and conference papers may be found at VBN.