In the following, our guiding principles for our research are briefly outlined.

How we work with HTL in the context of advanced biofuels

Hydrothermal Liquefaction (HTL) has been known for over a century as a method to convert solid carbonaceous material into an oil-like liquid. In the 1970s, it was applied to solid biomass (wood) to study biocrude production at the Albany site in the USA. Since the turn of the millennium, the last decade in particular, HTL has received significantly greater focus as a sustainable, flexible and cost-efficient method of producing an energy-intermediate in the form of a biocrude which can then be upgraded to transport grade fuels and products.

Our work with HTL derives from an ambition to produce sustainable fuels and contribute to the decarbonization of the transport sector. As this is a low-value but high volume market, efforts are directed towards effective conversion, feedstock agnosticity (additive co-processing) and sectoral integration. This means that we focus not so much on mass but on energy yield to the oil product; we work with supercritical processing as well as with recirculation of water soluble organics and fractions of biocrude; we work with high dry matter content input slurries and combinations of organic materials in the feed; and we work with detailed understanding of how the process implementation affects the chemistry of the conversion. The research work is carried out in state-of-the-art facilities comprising both batch HTL reactors and a unique pilot scale continuous HTL facility named the Continuous Bench Scale 1 (CBS1) plant.

As a technology, HTL lends itself favourably to both BECCS (BioEnergy Carbon Capture and Storage) or BECCU (BioEnergy Carbon Capture and Use) implementations, and thus provides opportunities not only for carbon neutrality but also carbon negativity. Depending on the level of sectoral integration, green electricity (through electrolysis) can play a larger or smaller role in the overall conversion, and surplus heat from the process can provide a sustainable source of heat for district heating networks. 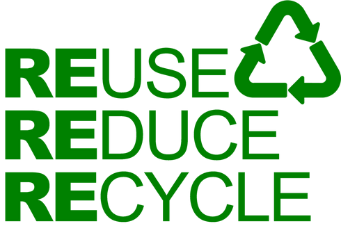 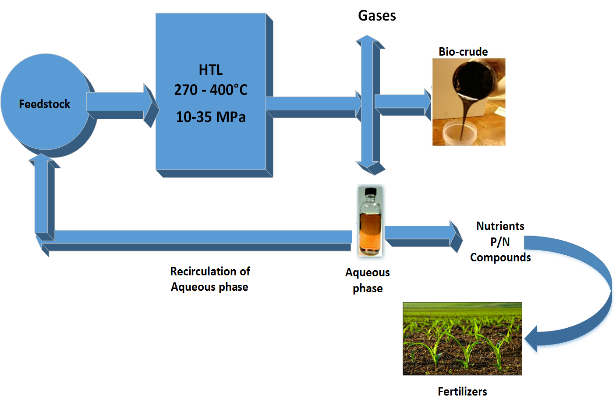 Advanced biofuel production can be an effective component in a circular economy through upcycling of low-value organic waste fractions into fuels and chemicals, and by recycling inorganics such as phosphorous as fertilizers for agriculture.

In HTL (Hydrothermal Liquefaction), which is the main technology we work with, water is the reaction medium; thus, wet biomass can be used as feedstock without the need for any energy and cost intensive drying step by use of effective internal water management. For this reason, HTL is an efficient alternative for the handling of wet organic wastes (e.g. sewage sludge, animal manure, digestate from anaerobic digestion, or food waste from municipal solid waste). The organic fraction is converted into an energy-dense biocrude, from which drop-in fuels can be derived, and the inorganics can be separated out either for sequestration (heavy metals) or reuse (fertilizers).

HTL offers an attractive solution to contrast the rising problem of waste products. The high temperature and pressure used in HTL eliminate also pathogenic bacteria and viruses as well as endocrine disruptants, therefore ensuring a safe and hygienic disposal of hazardous biowaste. The circular economy of nutrients (e.g. N, P, K) is simultaneously improved. As the cost of the feedstock is one of the major contributor to the fuel final cost, using wastes as feedstock is also beneficial for the overall economy of the process.

Similarly, we also work with waste plastic fractions, which cannot be easily sorted and therefore recycled. In this case, plastic materials are processed and high yields of biocrude oil can be achieved. The focus here is on the monomers, of which a significant part is recovered in the products, and, if separated, can be recycled for the production of new plastic materials.

How we work with upgrading

Biocrude, the product from hydrothermal liquefaction (HTL), is not suitable to be utilized as a drop-in transportation fuel as it is. Indeed, biocrude is a very viscous liquid, with a considerable amounts of heteroatoms, mainly oxygen (~10 wt.%) and nitrogen (up to 8 wt.%). It would not thus meet current standards for fuel, unless proper upgrading is carried out.

Our group works with HTL biocrudes from different feedstocks, with special attention to organic byproducts such as sewage sludge or manure. Upgrading methodologies take their inspiration from existing processes from the oil & gas field, which are adapted for the new challenges represented by biocrude. Our core-expertise is with catalytic hydrotreating, i.e. reacting oil with hydrogen under high pressure and temperature, in the presence of a catalyst. With a careful selection of process parameters, biocrude can be upgraded into drop-in fuels, i.e. fuels having the same specifications as those currently on the market.

Our lab is equipped with different experimental devices, from micro-batch reactors to a bench-scale continuous hydrotreater, enabling full process development, validation and scale-up. The possibility to study the whole process chain, from HTL to upgrading, allows for the simultaneous optimization of both processes, in order to achieve the maximum overall performance.

Several aspects are addressed by our group:

How we work with advanced fuels and products

Biocrude produced by HTL is by nature similar to fossil crude: it is a complex mixture of functionalized hydrocarbons, characterized by a boiling point distribution that can be employed to fractionate lighter and heavier compounds from each other by distillation or other means. Depending on the organic input to the HTL process as well as the operating conditions, specific compounds and physico-chemical properties will differ, as will the distribution of boiling points. Amongst other things, this means that we do not work with single-molecule fuels (such as MeoH, EtOH, BuOH), and that, from a single, oxygen and nitrogen free HTL biocrude, all relevant parts of the fuel spectrum are covered: from light compounds within the gasoline spectrum over medium compounds in aviation and diesel fuels to heavier marine type fuels.

The objective of our work with fuel products from HTL is to produce sustainable, synthetic drop-in biofuels; by the IEA Task 39 definition these are fuels that are chemically and physically indistinguishable from the existing fossil counterparts. In our view, these fuels can play a significant role in cost- and time-effectively decarbonizing the transport sector both in the short term, but also in the medium and longer terms. In order to produce such fuels, we apply different approaches in post-treatment such as catalytic hydrotreatment to remove heteroatoms, achieve bond saturation, change aromaticity, isomerize and so on, in order to meet fuel standards. We also look into specific properties within the fuel compounds that can be used to obtain improved combustion characteristics that contribute to lower emissions and improved local environment.

Sustainable aviation fuels are by definition drop-in fuels, and, as such, included in the work with HTL fuels. However, they are regulated by strict ASTM approval procedures in order to ensure their performance safety in operation. This process is a multi-tier process, where each tier requires significantly more fuel than the previous. In our current setup, we aim to be able to perform most Tier 1 and 2 analytics as well as “entry-level Tier 3” by testing fuels in an aeroderivative turbine test rig. Similarly, for road transport fuels, engine test bed and emission analysis can be carried out in the lab. 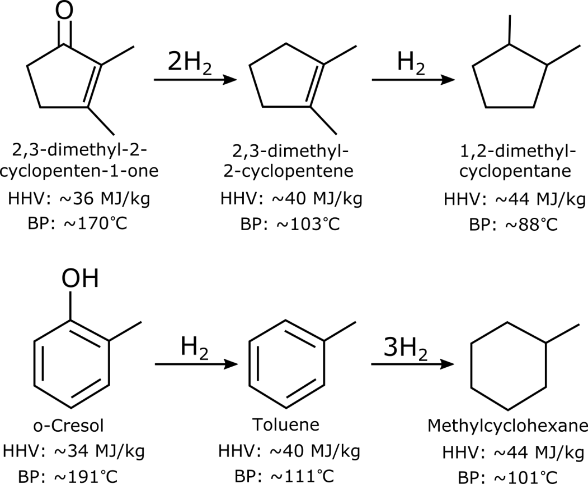 How we work with modelling

Being a high pressure, medium temperature thermochemical process, detailed and validated modeling of core processes, auxiliary balance of plant, and mass and energy integration is a key objective in the designing, scaling, and studying of the feasibility of hydrothermal liquefaction. Robust and reliable output parameters some such models are paramount for further engineering, environmental, and techno-economic assessments.

Through extensive laboratory work at scale ranging from grams-per-batch reactors to state-of-the-art continuous kg-per-hours facilities, coupled with a broad spectrum of thermochemical and thermophysical analyses of all process streams, we obtain detailed and validated experimental data for process simulation input.

Dealing with complex substances such as biomass, sewage sludge, and bio-crude oils, which cannot be modelled in a simple manner, novel methodologies are being developed, tested, and validated to calculate, for instance, energy needs and balances accurately and in an easily implementable way.

Based on core process modeling, pinch analysis and heat exchanger networking can be performed together with internal mass recovery and calculation of any external needs (balancing); energy and mass. These thermodynamic models are then coupled with external techno-economic models based on process simulations for total process economy. These figures are essential for studying HTL integration with other technologies, or as a balancing and buffering capacity for volatile electricity production.

Aspen+ and VMGsim are examples of process simulators available for process modeling.

How we work with HTL in smart energy systems

The energy transition from fossil-fuel based to renewable systems is vital to mitigate the severe environmental impacts caused by continued greenhouse gas emissions. The decarbonization of the energy system calls for the sectoral integration of electricity, heat and transport sectors in a “smart” system that takes advantage of renewable, highly available, wind/solar power to the largest extent possible. Nonetheless, the implementation of an integrated energy system that works with 100% renewables is limited by the inability of the power system to accommodate the intermittency of the sources despite of their large potential. In this regard, as the installed capacity of fluctuating electricity increases, it becomes crucial to implement variation management strategies to balance the system.

Power-to-X technologies are emerging as the most promising solution to provide flexibility in the use of electricity, and among them, Power-to-H2 is the alternative that is drawing more attention in industry due to the wide range of applications of hydrogen: fuel cells, gas turbines, feedstock in the chemical industry, etc. As in the HTL process hydrogen is a main resource for biocrude upgrading, the expected deployment of electrolysis technologies is a scenario that provides an opportunity for exploring HTL as balancing technology that utilizes hydrogen/electricity fluctuations for biofuels production.

Up to date there are no studies available on the use of HTL for grid balancing; however, it is foreseen that the integration of electricity fluctuations in a process that works mainly at constant load will bring several challenges in terms of process design, control and stability. From the process integration approach, different alternatives will be assessed to tune the steady-dynamic modes by means of buffer processes that can be enabled depending on electricity availability and carbon emission targets. As an example, at high electricity surplus, electrofuels production from the aqueous and gas phase can be enabled for maximum carbon recovery and utilization in a BECCU configuration; while at low availability, CO2 sequestration could be a better option in a BECCS configuration.

In this way, in a future scenario of highly available renewable electricity, the production of electro/drop-in biofuels via HTL is considered as an interesting strategy to explore, aiming to its consolidation as feasible technology to cover segments of the transportation sector with higher dependency on fossil fuels, thereby contributing in the development of a future smart energy system with zero carbon emissions. 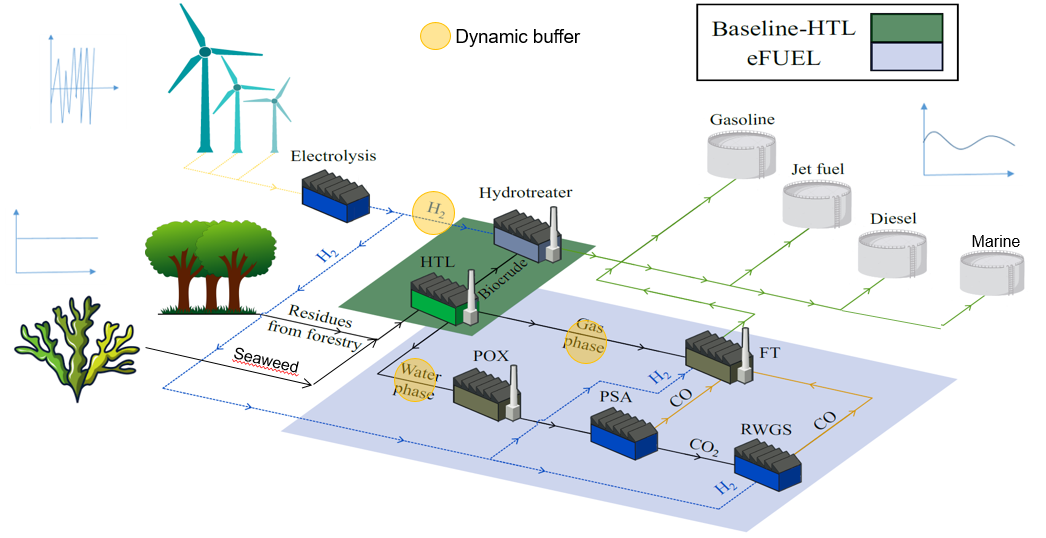